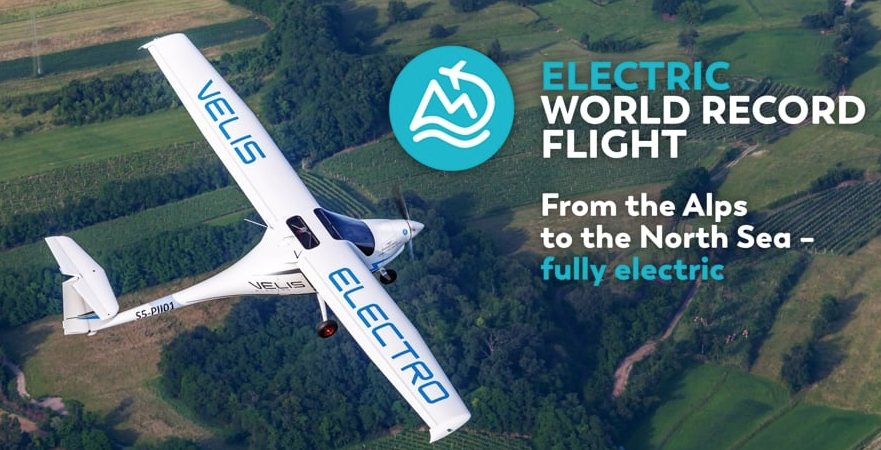 The world record flight with the first certified electric aircraft from the Alps to the North Sea at Norderney was a success.

The EWF team has ushered in a new era in aviation and demonstrated that electric flight is possible on long-haul routes.

For most of them, passenger flights with small battery-powered planes were a long way off.

To prove that it is a reality today, seven daring electrical enthusiasts set out on August 31, 2020 with the first certified electric light aircraft and arrived in Norderney on September 2, 2020.

In the process, five world records fell. Combustion Aircraft: Your aircraft required less than a quarter of the energy for the route than conventional airplanes.

This required challenging planning: there is no infrastructure for electric aircraft on the entire route. Therefore, two electric car ground crews had to drive two chargers in a rabbit and hedgehog game in front of the plane.

The plane flies at about 120-150 km / h in a straight line, the cars have to adapt to the road conditions. Meticulous planning was required to minimize waiting times during loading.

The CleanElectric.de podcast community was extremely helpful in testing the suitability of 3-phase power connections at airports in Germany in the run-up to the flight.

The specialized and non-specialized press are enthusiastic, numerous television reports and publications in the The mainstream press clearly show this.

(Fédération Aéronautique Internationale) in the next few days:

This means that the average consumption is 22.76 kWh / 100 km, which corresponds to 2.33 l diesel (diesel equivalent in energy:

Calculated over the entire distance, the Pipistrel Velis consumed the energy equivalent to 19.58 liters of diesel.

This puts the aircraft in the range of a Tesla Model S, making it a new benchmark in aviation.

The two predicted records related to the flight altitude achieved and the fastest rate of climb were planned for Norderney, but could not be flown on September 3, 2020 due to weather.

This means that the specification benchmark is maintained. (12,000 feet altitude) Fastest average speed over 100 km (km / h) 136 km / h on the route from Lahr airport to Karlsruhe / Baden-Baden airport

The fewest intermediate stops in a distance of 700 km Number of stops: 11 (no departure or arrival)

This project would not have been possible without the great support of the “CleanElectric” podcast community, airfield and airport operators and employees, and sponsors.

The community invaded all of Germany to test plugs at airports with their electric cars, organize welcome events, inform local media or donate money.

Many airports have specially revised or even expanded their electrical installations.

The reception and organization on site were unique – the sponsors not only gave money, but are also constantly engaged in the fields of power generation, charging infrastructure, or other sustainability issues.

Some of them met the team at the airfields, traveled with them in person, or were on site when they landed in Norderney.

Highlights and obstacles There is no pioneering feat without the unexpected: from the beginning, the rainiest day in 15 years in Schänis, Switzerland, awaited the team.

Therefore, the start had to be postponed for one day, as the track was 12 inches under water and could only be pumped at night.

After that, however, the subsequent planning went smoothly.

There was a brief moment of shock at the Baden-Baden airport when the aircraft’s charger suddenly tested “positive” during the explosives check.

Fortunately, this was quickly resolved, after a forklift had brought the device to a special X-ray machine.

Finally, the Norderney Fire Department received the electric plane with the rare and special honor of a water arc over the track, then the happy team was greeted by an enthusiastic crowd.