The longest marine Mountain Range in the world 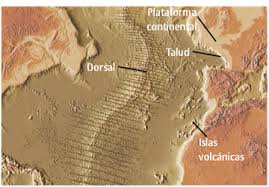 With an extension of 80,000 km around the ocean, “Mid-oceanic Ridge” is considered the longest mountain range in the world.

This underwater mountain range lies under the middle of the Atlantic Ocean (emerging in Iceland) surrounds Africa, passes through the Indian Ocean, between Australia and Antarctica, and returns north through the Pacific Ocean.

This system of mountains and valleys across the globe resembles the seams on a baseball. It is submerged at a depth of between 3,000 and 5,000 meters below sea level.

A true giant hidden under the waters.

In terms of width, the Mesoatlantic ridge has an extension that occupies approximately 1,500 kilometers in its most important parts, and in terms of the height of its peaks it only exceeds 3,000 meters in the points closest to the surface, so it is light years from the highest mountains on the earth’s surface.

The ridges are limits between tectonic plates in which the plates move away from each other, for this reason they are called “divergent limits”.

In expansion zones, when there is a separation of tectonic plates, there is a process of magma outflow towards the surface.

As these expansion zones are under the ocean, this magma or molten rock emerges and solidifies in such a way that it generates a ridge, a mountain range that extends along the edge of the plates.

Since mid-ocean ridges are generally submerged in the depths of the ocean, it was not until the 1950s that they were known by examining the ocean floor in detail, which at that time was known to its full extent.

The Vema, a ship from Columbia University’s Lamont-Doherty Earth Observatory, traversed the Atlantic Ocean and recorded data on the ocean floor from the surface of the ocean.

A team led by Marie Tharp and Bruce Heezen analyzed the data and concluded that there was a huge mountain range in the middle. Scientists called it the Mid-Atlantic Ridge.

At first, the ridge was believed to be a specific phenomenon of the Atlantic Ocean.

However, as studies of the ocean floor continued around the world, it was discovered that each ocean had parts of the mid-ocean ridge system.