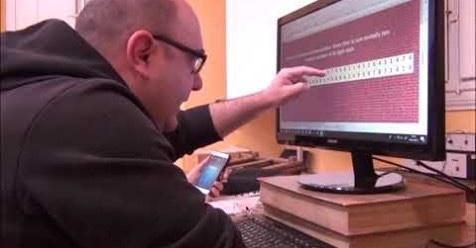 A conversation with the world record holder Paolo Fabiani We meet Paolo Fabiani in the public library of Rufina, a little town in the Florence countryside, Italy. In this library he has set five records in mental calculation and memorization in a single test session, which have recently been recognized as Official World Records.

There are so many prodigies that make amazing mental calculations, and others that can memorize very long lists of words or numbers.

What is your specialization? I am mainly interested in the philosophical and psycholinguistic aspect of mental calculation and memorization.

Most of those who set records don’t do it to prove scientific theses. Nevertheless, many people claim to teach others how to study, but if you go to check, they have seldom, if ever, produced studies in any research area.

At the very most, they have written popular books. Logic would suggest that first we become specialists in a research area, and then we become popularizers. I think it’s a bit contradictory to want to teach others how to study, if you didn’t produce relevant studies in any academic field first.

As far as I’m concerned, I’ve been studying these things (history of philosophy, philosophy of the imagination, didactics, psychology of education) for decades and the large number of studies I’ve published prove it1.

Furthermore, I specialize in the area of study specific to understanding how our mind works, this being the most important way to understand the mental calculation and memorization techniques.

My goals are mainly aimed at demonstrating some theories in the field of cognitive sciences.

There are many experts in mental calculation all over the world, especially in the Far East (India, China, Japan, etc.) where they teach using the abacus from an early age. It is evident that out of such numerous practitioners, every once in a while a genius is born. However, no one has ever been able to mentally perform a mathematical operation with numbers of 30 digits each as I did. I have no particular mental abilities.

I don’t even have the ability to calculate and memorize above the norm.

These amazing results are only due to having put into practice the knowledge I’ve learned from my studies. I did not make revolutions, at least not directly, but I made significant innovations in what was already known.

What do you mean by “I have brought innovations to what was already known”? Over the years, deepening the subject, I have changed my opinion several times on the use of images in mental calculation. In some of my writings, until a few years ago, I declared that the images were an obstacle, not a help, to mental calculation. In reality, it was the use made of it that was an obstacle.

Using mental images, as handed down from classical and Renaissance texts on the art of memory, or from current popular manuals, is very counterproductive for mental calculation.

If you use mental images as taught in mnemotechnic books, study aid, cognitive empowerment, etc., surely they will reveal to be an impediment.

This is the truth, despite the authors of many of those books declaring the opposite. I have changed my perspective by studying the relationship between mental images and abstraction.

There is a book that I wrote in Italian, titled Metaphor and Memoryabout these topics.

Knowing how to manage and coordinate different levels of abstraction is the key to using mental images effectively. Understanding the mental schemes that are activated when we think of certain images – and, above all, certain sequences of images – is at the basis of every effective calculation and storage strategy.

That is the nerve center of the whole issue. In reality, it is a subject that is not well-studied because it is difficult to identify. In fact, I was forced to carry out these world records to give a little visibility to issues that otherwise would remain in the shadows.

Few people are able to deal with complex, truly complex issues; so in the end, even important things are likely to remain on the margins of the debate simply because they are difficult to disclose. I also share the opinion that we must try to make the concepts as simple as possible, but not simpler, as Einstein said.

And in some theoretical issues, things cannot be simplified, except at the cost of emptying them of meaning. Nevertheless there are a lot of studies that are falsely complex and, behind an obscure language, they hide a void of meaning.

That fraudulent way of doing research, so fashionable now, doesn’t concern me.

When I talk about complexity, I refer to a real complexity.

I like theses that can be demonstrated, somehow or other.

And my case is perhaps the only one in which philosophical and psycholinguistic theses are supported by records.

What I mean is that if someone wants to deny the validity of my theories, he/she has to do nothing but be able to do mathematical mental calculations with numbers larger than 30 digits each, and do it using a different technique than mine. This is the only way to show that today there is a better conception of mental images than mine.

Everything else is just useless chatter. I hypothesize, however, that nobody will do it. It’s much more convenient to ignore than to take up the challenge. I don’t care if someone breaks my records, maybe it could be quite easy for someone to break some (not all) of them.

Except for the addition of two numbers of thirty digits each (done in the same way I performed it) which I think is difficult to break, the other records can be overcome with a little exercise.

Anyway, to be fair, without the tension of the public, I’m also able to do better.

The problem is another: my concern is that no one understands how I can do them, that is, nobody understands the scope and breadth of applications of what I have discovered or, at least, clarified.

Can you explain why your records are more important than others to prove philosophical theses? To explain why, I should write a book, and maybe I will. In a nutshell, I can say that the techniques I used to carry out these records, respect some cognitive “laws”, namely they take advantage of certain characteristics of the human mind. Addition is the fundamental operation of all mathematics, not just arithmetic. All other operations depend, in one way or another, on it. It is also the simplest. Even an illiterate knows how to add up.

However, no one up to now, before me, has ever been able to mentally add up to such large numbers.

This proves, even to the most skeptical, that with these records, I caught onto something important at the center of mathematical thinking.

What are the records you set and what do they mean in the area of didactics and learning? Generally, performers establish records in mental calculation, or memorization, not in both sectors.

The ones I established instead require the integration of both activities. The purpose of my records is not primarily the spectacular aspect, however present, but – as said – what it is possible to demonstrate through them in terms of research on memory (not least the working memory), imagination and mental schemes. Understanding these things also means being able to take advantage, optimize and perfect the use of our cognitive abilities to improve our performance in study and work. Is there a particular test that you want to explain to us? Yes, one of the tests I passed was about mentally performing arithmetic addition of two random numbers of thirty digits each. I did calculations aloud, column by column (step by step) and when I wrote the result, I didn’t see the addends since I wrote the answer on another sheet.

I performed the test without any material support or other kind of help. I used a spreadsheet that the jury checked cell by cell, formula by formula.

They were mainly focused on working memory. From a scientific point of view, these successful attempts are even more important.

They also help us improve concentration. Furthermore, they help us increase reading speed. If you already know how to read in a foreign language, they will help you improve understanding and speed of reading in that language. Finally, these exercises improve mental flexibility. Do these tests (and the techniques you used to overcome them) have a practical application? There are many applications.

Most of them are the same as all other memorization techniques and study methods. However, there is another thing to consider; I would like to introduce a new concept in this regard. I state that my reasoning is purely logical and didactic, non-therapeutic. I’m not talking about therapies.

What is it that prevents a person from learning correctly? Logically speaking, there is something that creates an impediment, an interference, a disturbance, a background noise. In my tests I inserted many disturbing elements: repeating the calculation aloud; seeing numbers and having to do the calculation with other different numbers (it is evident that 7 squared is 49, but what you see is 7 and 2 not 49); having to convert numbers from binary to decimal (if you see “1001101” you have to think of 77, because 77 is the decimal counterpart of the binary number “1001101”); making a numerical calculation having to count dots instead of numbers (the dots of the dice faces); to be able to observe the elements (addends or multiples) only for a short period (a tenth of a second), etc.

Despite these disturbing elements, I was able to do calculations that people are normally unable to do. This means that my method and the techniques I use are extremely effective and allow me to overcome these (and other) elements of disturbance to the calculation and, by extension, to learning. Can you demonstrate that no one had established these records before? My records in mental calculation and memorization are official world records certified, verified and recognized by Official World Record Organization (OWR)2. (2) 1 In the Academia.edu (the most important social web platform to share scientific studies that has more than a one hundred millions of scholars registered in the whole world) ranking, today (Oct. 22 2019) that we do the interview, Paolo Fabiani profile is in the one per thousand of the more followed. 2 Official World Record Organization (OWR) is a legally registered NGO based in the European Union, and has the legal pertinent guarantee to do it’s activity worldwide. OWR is the unique world records register organization recognized by the Council of the Notariats of the European Union (Notaries of Europe) and convalidated by the official Notary Colleges of the whole world. That’s because OWR is so specially distinguished and unique as an organization able to register world records worldwide.

OWR ensures a rigorous procedure followed by it International Acceptance Committee from the beginning to the end of the process of set or break a world record. OWR verify and authenticate all the proofs with our judges to authenticate the records following the rules for each record category.